Edinburgh Gin Advert premieres with projection onto The Dome

Edinburgh Gin premieres its new advert on the streets of Edinburgh at 6pm tonight, with a special night-time projection on one of the city’s most iconic buildings, The Dome. 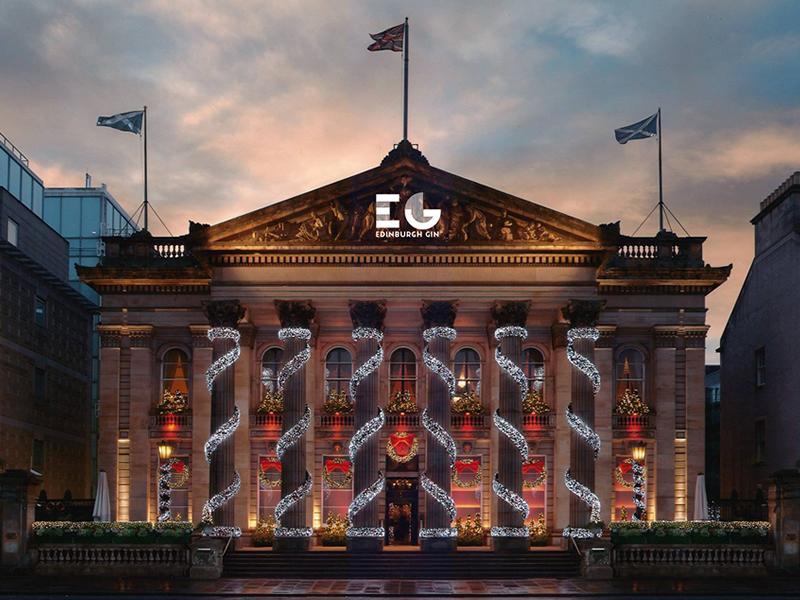 Edinburgh Gin will tonight (Tuesday 3rd Dec, 6pm) premiere its new advert on the streets of Edinburgh, with a special night-time projection on one of the city’s most iconic buildings, The Dome.

Creatively reimagining the taste of their signature Rhubarb & Ginger gin, the advert - part of the brand’s new ‘Filled with Wonder’ campaign - leads viewers through a fantastical journey of flavour, capturing the brand’s point-of-difference as a highly original but carefully considered gin-maker.

Casting its hometown Edinburgh in a starring role, the new TV spot transports its audience through changing perspectives in the city, representing the imagination that lies behind Edinburgh Gin’s craft; shifting from a blossoming flower bed, to an urban party surrounded by a forest of rhubarb.

Edinburgh Gin is giving locals the chance to be the first to see the advert, live, as The Dome switches off its famous Christmas decorations for the magical one-off projection at 6pm tonight. Guests of the venue will also be invited to raise a glass to this landmark campaign, with a free Rhubarb & Ginger Edinburgh Gin & tonic on-the-house.

The activity is part of a wider multi-million-pound campaign that will raise awareness of the local brand throughout the UK.

“Made in Edinburgh, one of the wonder capitals of the world, imagination is in our DNA” said Neil Boyd, UK Managing Director of Ian Macleod Distillers, who own Edinburgh Gin. “That’s the story our new campaign sets out to tell. We are proud to make our gin here and we’re excited to tell that story to the rest of the world, starting with a rather special premiere at The Dome.”

“We have always led the way as a brand, pioneering both flavour and choice – a precedent we’re committed to continuing. It’s an exciting time in the category and this landmark campaign signposts a wonder-filled year to come for Edinburgh Gin. We plan on bringing the concept to life even further in the coming months, introducing moments of wonder to excite drinkers, from special events, to new partnerships.”

Steve Hall of The Dome said: “The Dome is a place of wonder, especially at this time of year, and so we are delighted to host such a special one-off event for Edinburgh Gin. It’s the first time we have had a projection displayed on The Dome and we can’t wait to watch the new advert ourselves.”

The campaign comes at an interesting time for gin. It is now the U.K.’s most popular spirit* having experienced astronomic growth in recent years. More than a quarter of the population has bought gin and gin liqueurs in the 12 months to June 2019, helping to create an industry worth £2.2bn**. Edinburgh Gin has played a key role in defining the market and currently has 3 of the top 8 best-selling flavoured gin products.

Three new, full-strength flavour extensions from its multi-award-winning distillery have been released in the past year, including Rhubarb & Ginger, Lemon & Jasmine and Bramble & Honey, each of which combine their own balanced natural flavours with the juniper-forward profile of a classic gin (all are 40% ABV, 70cl and have a RRP of £28).