Beatrice Mackay, a resident at an Edinburgh care home, celebrated her 100th birthday and revealed the secret to living a long life. 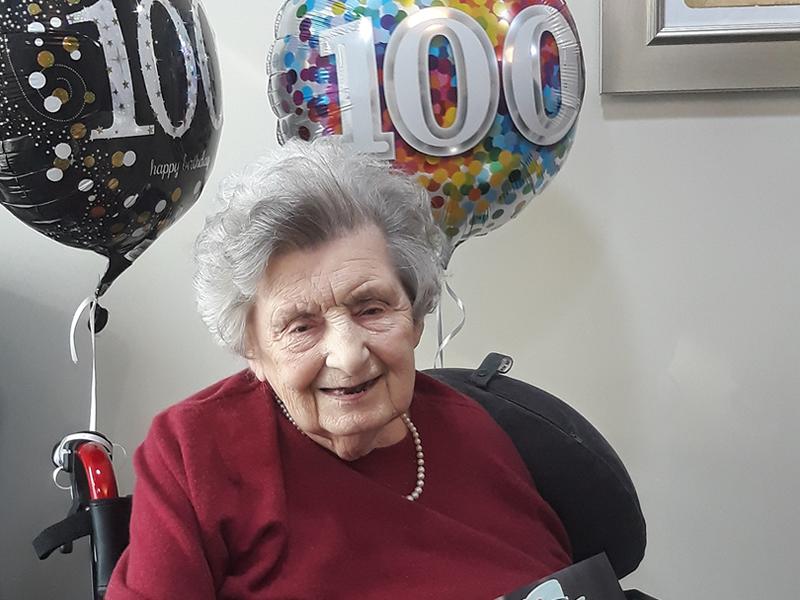 A resident at an Edinburgh care home celebrated her 100th birthday and revealed the secret to living a long life.

Birthday celebrations were in full swing at Care UK’s Murrayside, on South Beechwood, when resident Beatrice Mackay turned 100 years ‘young’. She revealed the secret to living to this impressive age is being out in the fresh Highland air as much as possible – and a good dose of stubbornness.

Beatrice was born on 19th October 1919 in Tain, where she lived for 99 years, before moving to Murrayside this month to be closer to her family. As a keen churchgoer, member of the Women’s Guild and founder of the local flower club, she was a well-known figure within the community. She met her husband Murdoch, a local bank manager, while she was working at the Post Office. Together, they had two children – Catherine and James.

A keen gardener and flower arranger, Beatrice is also a talented dressmaker, knitter and embroiderer, and also enjoys reading the news and solving crossword puzzles.

To celebrate her milestone birthday, the team at Murrayside hosted a special family party, where Beatrice received around 100 cards, lots of flowers and a birthday cake. Guests were also joined by an entertainer for the afternoon, and Beatrice’s great grandchildren joined in the fun by performing “Baby Shark” for the residents.

Home manager at Murrayside, Michelle Reid, said: “Residents are at the heart of everything we do here at Murrayside, and we always like to throw a party for special celebrations – and Beatrice’s 100th birthday was no exception.

“It’s fantastic to see Beatrice celebrating this incredible milestone with her family and friends at the home. She’s been a fantastic addition to the Murrayside family since she moved in earlier this month, and we’re looking forward to celebrating many more milestones!”

Beatrice said: “I’ve had a really lovely day. Everyone has been so nice and it was extra special to receive birthday greetings from the Queen. I also got a card from the Dept of Work & Pensions, which I thought was funny!”

A critically endangered swift parrot chick born at the Royal Zoological Society of Scotland’s Edinburgh Zoo has successfully fledged the nest after hatching in July.

Midlothian Tea & Blether, run by Carol Hamilton from Alzheimer Scotland, is an informal social group for people living with dementia.

The home of the ultimate big screen experience was re-launched for film-lovers in Edinburgh on Friday 7 August, just in time for this year’s most anticipated blockbusters, Tenet!