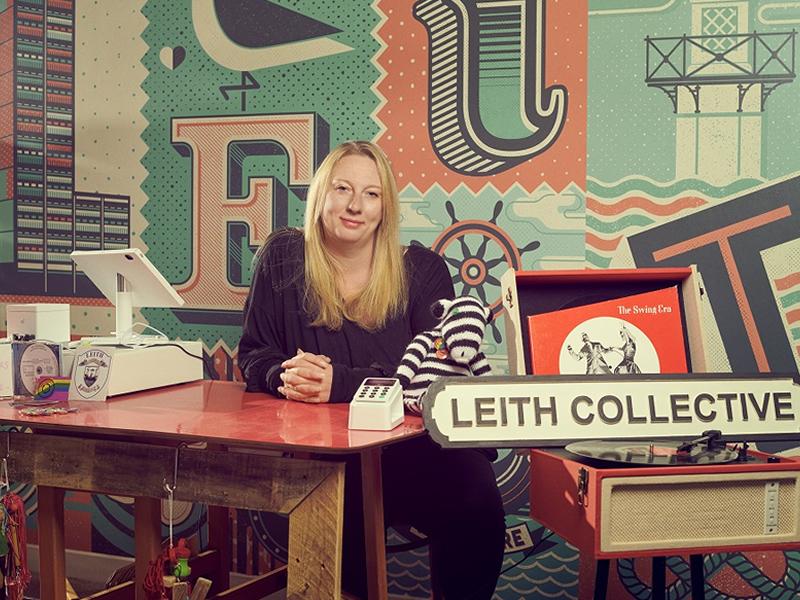 This is an incredible achievement for Sara who founded The Leith Collective just two years ago and who launched The Clydeside Collective earlier this month.

● With 100 days to go until the UN climate change summit COP26, 13 ambassadors are encouraging the country to follow their green footsteps and play their part in tackling climate change

People from across the country will have the chance to showcase their stories at the major climate summit COP26 in Glasgow, as a search for everyday climate leaders gets underway today (Saturday 24 July).

In the lead up to COP26 with less than 100 days to go, the UK Government is calling on people from all walks of life to join the ‘One Step Greener’ movement on social media by sharing how they are doing their bit for the environment, championing climate leaders in their communities, and inspiring others to follow their lead. Whether big or small, one or many, green steps around the country can culminate in a large collective impact in helping make Britain a more sustainable and greener place.

The nation will also be able to nominate people in their communities who they think are making a big difference in the fight against climate change. They will have the chance to become ‘One Step Greener’ Ambassadors and showcase their stories at COP26 this November – which aims to be the most inclusive COP ever. Those nominated could be family members, friends, colleagues, community leaders or entrepreneurs: anyone who is taking action to tackle climate change and inspiring others to follow in their green footsteps.

Leading the charge are 13 inspiring people, announced today as the first ambassadors for the ‘One Step Greener’ initiative, who will be launching the search for another 13 extraordinary individuals ahead of COP26 – making 26 everyday climate leaders in the UK to mark the 26th climate summit of its kind.

The ‘One Step Greener’ Ambassadors will come from all walks of life in their pursuit of a greener future, as they come together with government, businesses, community groups, schools, and citizens in taking steps to tackle climate change.

Prime Minister Boris Johnson said: “The UK has made huge strides towards a greener future, with new records in renewable energy and new targets for slashing emissions. But there are also thousands of people across the country doing their bit too, from embarking on green careers and building sustainable businesses to reducing their use of plastic and taking part in conservation projects.

“We can all do our bit to help tackle climate change. That’s why we’re challenging everyone to go one step greener in the next 100 days and win the chance to become an ambassador ahead of COP26 in Glasgow this November.”

COP26 President-Designate Alok Sharma said: “In my many meetings with ministers and governments around the world we discuss the big changes which urgently need to be made to tackle climate change. Setting ambitious emissions reductions targets, supporting developing nations, and protecting nature are all vital if we are to keep temperatures from rising above 1.5C.

“But there is a role in tackling climate change for everyone, and it is heartening to see all parts of society embracing their responsibility to safeguard our precious planet, no matter how big or small a step.”

The Clydeside Collective and The Leith Collective founder Sara Thomson said: “I couldn’t be more delighted to be named a One Step Greener Ambassador ahead of COP26. This is a great opportunity to tell us about what you, or someone you know, is doing to be one step greener. It could end up with you joining us to help tackle climate change at COP26.”

World leaders will meet in Glasgow with the aim of agreeing how to tackle the urgent threat of global climate change. The UK is working to prevent global temperatures rising above 1.5C and to protect the planet and people from the intensifying impacts of climate change, which unchecked will lead to further catastrophic flooding, bush fires, extreme weather, and the mass extinction of species. The UK has been leading the way and shown that green growth is possible. The UK was also the first country to commit to reduce carbon emissions by 78% by 2035 and is on course to be the fastest G7 country to decarbonise cars and vans by 2030.

British female racing driver Alice Powell has become one of the first ‘One Step Greener’ Ambassadors. Yesterday, Powell arrived in her ground-breaking Envision Virgin Racing Formula E Car racing car which is redefining the green future of motor sport. There she met with the Prime Minister's Spokesperson for COP26 Allegra Stratton to discuss her involvement as an Ambassador for the ‘One Step Greener’ initiative. Alice and the Envision Virgin Racing team will also host COP26 President-Designate Alok Sharma at the London ePrix, an annual race of the single-seater, electrically powered Formula E championship.

The ‘One Step Greener’ Ambassadors have been announced today to cover all parts of the UK and include:

Dame Jackie began her NHS career as a nurse before moving into management and has been a Chief Executive Officer for 20 years leading a range of acute, mental health and specialist trusts. She was appointed as Chief Executive of Newcastle Hospitals in March 2018 and since then, the Trust has retained its outstanding CQC status and became the first NHS organisation to pledge to reach Net Zero Carbon. She was recently named as one of the top five chief executives of the year in the HSJ awards for 2021. Dame Jackie Daniel states, “COP26 will be a defining moment in the global effort to tackle climate change and I am honoured to be named a One Step Greener Ambassador. Climate change poses a major threat to people’s and the planet’s health which is why the NHS in England has committed to become the world’s first carbon net zero national health system. I hope I can encourage the public to do their bit to protect our planet as well as nominating others who are going One Step Greener.”

Nominations will close on 1 October and the final 26 ‘One Step Greener’ Ambassadors will be announced on 7 October, 26 days before the crucial summit begins.