Chef Barry Bryson is bringing his unique style of culinary creativity to Edinburgh’s Jupiter Artland near Wilkieston this summer with a series of ten wild dining events. 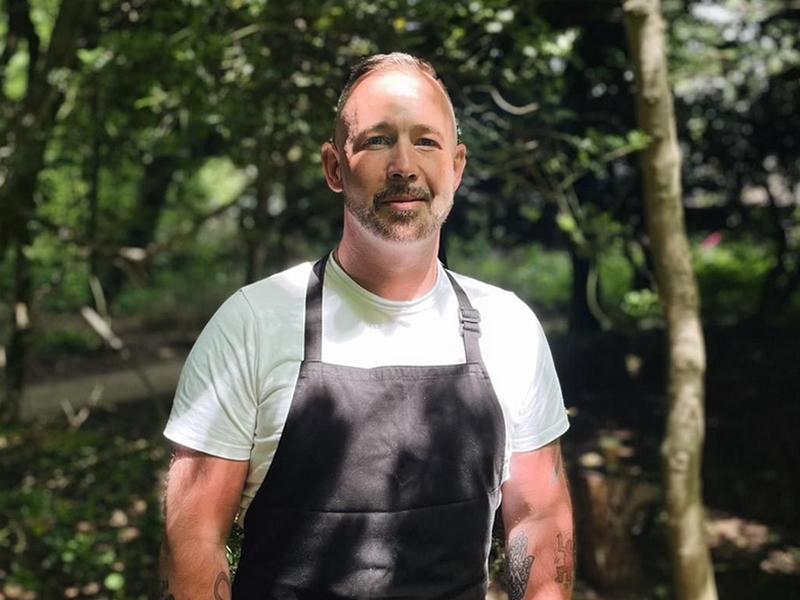 Scotland’s Events Chef of Year is bringing his unique style of culinary creativity to Edinburgh’s Jupiter Artland near Wilkieston this summer with a series of ten wild dining events.

For the first time, Edinburgh chef, Barry Bryson, is staging the pop-up events in the woodlands at the contemporary sculpture park and art gallery on selected dates between Thursday 1st July and Saturday 28th August.

Barry, who was crowned Scotland’s Banqueting and Events Chef of the Year by Catering in Scotland last month, has created a unique sensory experience for lovers of food and the outdoors to enjoy a specially designed four-course menu under a shaded canopy of branches and twinkling lights.

All dishes will be garnished and presented with wild edibles largely foraged from the grounds of Jupiter Artland.

A varied small wine list, cocktails and beers will be also be offered, as well as herbal soft drinks and bottled water.

Jupiter Artland offers over 100 acres of meadows and woodland for people to safely explore nature and art, including over 30 permanent site-specific sculptures from artists such as Phyllida Barlow, Charles Jencks, Anish Kapoor, Cornelia Parker and Antony Gormley.

Barry first started working with Jupiter Artland in 2009 when he developed, managed and nurtured the cafe for five years.

“I’m really looking forward to returning to Jupiter Artland for this unique series of dinners. I cannot imagine a setting I would rather create a woodland dinner than on this magical place.

“I’ve designed a menu combining the familiar with the less familiar, which I’m seriously excited about cooking.

“The focus for me with these dinners will be bringing as much flavour and taste as I can, alongside comfort and good cheer to compliment the incredible natural backdrop guests will dine in.

“Eating out again feels such a step forwards for all of us and this really is eating out.”

Chef Barry Bryson is motivated and inspired by Scotland’s natural larder, creating seasonal menus that combine traditional and contemporary cooking techniques. He skilfully takes restaurant concepts and fine dining to the events platform, showcasing his modern Scottish food in a variety of unique venues across Scotland and beyond with accessible luxury dining experiences.

His enviable client portfolio includes some of the world’s most iconic luxury brands, as well as the Edinburgh Food Festival, Foodies Festival and Edinburgh International Book Festival. In 2018, Barry took his culinary creations to the stage after being personally selected by TV cook, author and journalist, Nigel Slater, to star in his autobiographical play, ‘Toast’, at Edinburgh’s Traverse Theatre.

“Barry and Jupiter have worked together for many years and is an important part of the wider Jupiter Family. Barry never fails to excite with his creative menus and infectious energy.”

The magical woodlands are set to come alive after-hours with a feast for the senses, set on one long table. In line with current government guidelines, Chef Barry Bryson can seat up to six people from a maximum of two households on a shared communal table. Social distancing and strict hygiene measures are observed.

Warm, comfortable and waterproof clothing is advised as all events will be staged outdoors in the woodland at Jupiter Artland.

On arrival, guests should meet outside the steadings at Jupiter Artland’s Café Party, where they will be escorted to the woodland.

Tickets are priced at £55 per person and are available on a first come, first served basis from https://www.jupiterartland.org/sessions/wilding-dining-with-barry-bryson