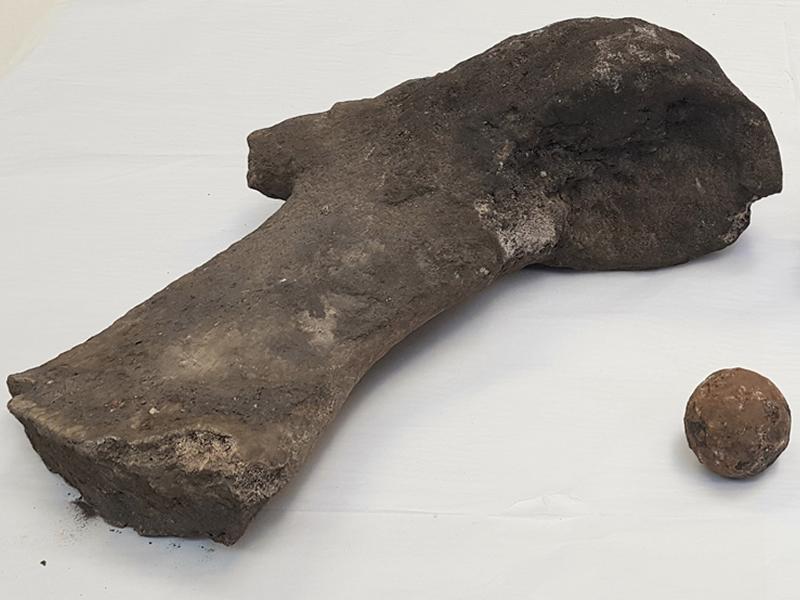 An assortment of historic artefacts unearthed around Constitution Street as part of the Trams to Newhaven project, along with archaeological investigations, have shed new light on the area's history.

The relics, discovered during excavations carried out earlier this year in preparation for the tram works, range from rare whale bones to a cannonball thought to date back to the 17th century, as well as possible remnants of Leith’s 16th/17th century town defences.

Investigations also revealed evidence which could suggest the reclamation of parts of Leith foreshore – when land was extended into the Forth – happened earlier than first thought.

Now, as we prepare to begin the project’s main construction works on Leith Walk, as well as resuming excavations, archaeologists from GUARD Archaeology Ltd, who are undertaking work on our behalf under swept path contractors Morrison Utility Services, have shared images and their analyses of the remains found so far, which include:

Whale bones: Found on Constitution Street to the north of its junction with Baltic Street, a matching radius and ulna (part of the fin) of a large adult male sperm whale. The bones have yet to be carbon dated (this has been delayed due to the coronavirus pandemic), which will help explain how they ended up under the pavement in Leith. Amongst possible theories are that they were brought back in the 19th or 20th century as a memento as part of Leith’s historic whaling industry, that they came from the remains of a whale beached locally and were subsequently dumped there or that they were part of medieval deposits left there during the reclamation of the site in the 17th to 19th centuries, perhaps dating back to the medieval period.

Town defences: Prior to lockdown the heavily truncated remains of a large stone wall were discovered running east to west under the junction of Bernard Street and Constitution Street. This may be part of the seawall for the 16th and 17th century town fortifications – the team will be investigating this when the project restarts.

Archaeological work began on Constitution Street in November 2019 and was stopped at the end of March, along with the wider project, to comply with Government guidance and to protect the safety of workers and residents in light of the coronavirus outbreak.

During the first phase, the team also took down part of a wall surrounding Constitution Street Graveyard, dating back to 1790, ahead of excavation of the historic graveyard thought to be underneath Constitution Street and the South Leith Parish Church wall. Preparatory work to recover any human remains, led archaeologists to discover what appears to be a large charnel pit which may contain the remains of some burials recovered from the laying of 19th century services in Constitution Street. This will be further investigated when works recommence.

Traffic management will be installed on the evening of Friday, 19 June and will be operational from 5am on Saturday, 20 June, including Lothian Buses diversions. This will involve Leith Walk being reduced to one city bound lane between London Road and Crown Place for the duration of the works.

All works, including archaeological investigations, will be carried out while maintaining physical distancing and with additional measures to protect workers’ and the public’s health in place.

Find out more about Trams to Newhaven on the project website.