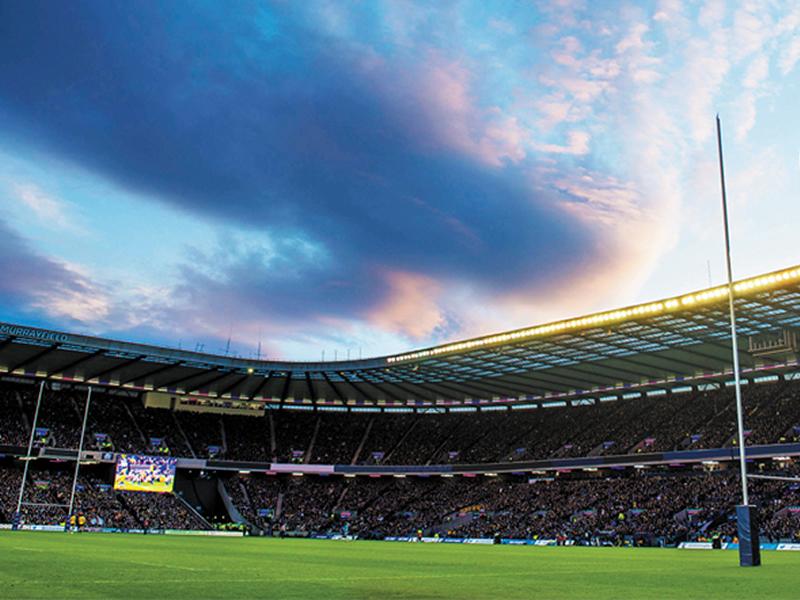 Murrayfield Stadium (known as BT Murrayfield Stadium for sponsorship reasons, or usually just known as Murrayfield) is a sports stadium located in the west end of Edinburgh, the capital of Scotland. Its all-seater capacity was recently reduced from 67,800 to 67,144 to incorporate the largest permanent "big screens" in the country, though it remains the largest stadium in Scotland and the 6th largest in the United Kingdom.

The stadium is the home of the Scottish Rugby Union (SRU), and is primarily used as a venue for rugby union and hosts most of Scotland's home test matches, the Scottish Hydro Electric Cup final, as well as Pro12 and Heineken Cup matches.

Although mainly a rugby union stadium, Murrayfield has in the past hosted American football, rugby league and association football matches and music concerts. One of the most notable of the latter was the Edinburgh 50,000 - The Final Push concert as part of Live 8.

All information (whether in text or photographs) is supplied in good faith but should not be relied upon as being a statement of representation or fact. We take every opportunity to ensure the details for BT Murrayfield Stadium are accurate, please contact us at hello[@]whatsonnetwork.co.uk if any of the above information is incorrect.

Kirkliston Leisure Centre is a modern, purpose built venue offering all the facilities you need for a healthy, active lifestyle.
Read more

Sitting in the shadow of the spectacular Arthur's Seat on Dalkeith Road, the 'Commie Pool' is so much more than Edinburgh's only 50 metre pool.We're proud...
Read more

Drumbrae Leisure Centre is a bright, airy single level venue that takes advantage of its hilltop location with plenty of green spaces and breathtaking views of the Firth of Forth.
Read more

The Crags is not your typical sports centre. There’s no grumpy janitors, just people who care about changing lives through sport.
Read more

Come and re-discover Glenogle Swim Centre in the heart of Stockbridge.Our beautifully restored Victorian 'baths' have a modern twist from the swimming...
Read more

Gracemount caters to a wide range of sports and activities from the outdoor fives to indoor fitness classes.
Read more

Our purpose built, modern leisure centre at Craiglockhart is a hub of activity and offers facilities for everyone to enjoy a healthy, active lifestyle...
Read more

All Sport and Leisure Centres listings in Edinburgh