In celebration of 175 years of ground-breaking research into religion, spirituality and the arts, the University Of Edinburgh's School of Divinity is delighted to host it's first ever literary festiva 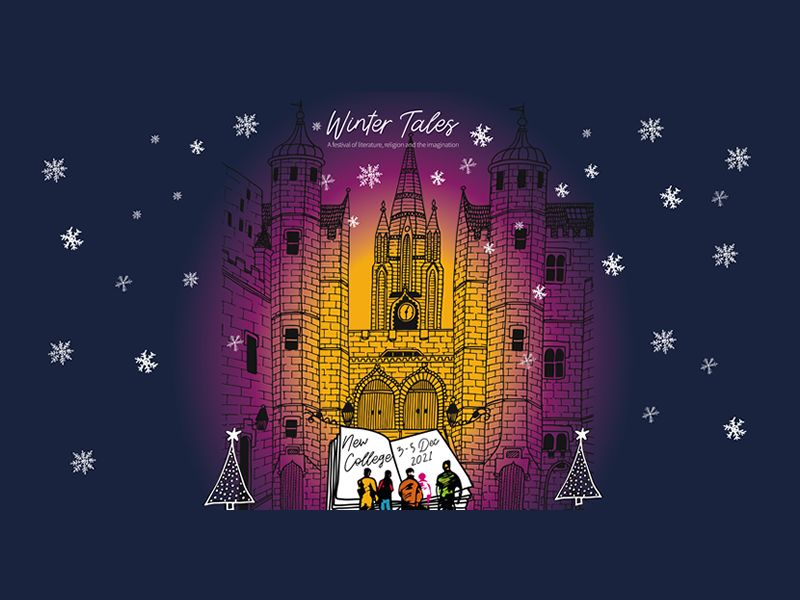 A festival of literature, religion and the imagination

In celebration of 175 years of ground-breaking research into religion, spirituality and the arts, we are delighted to host our first ever literary festival. There will be an array of top speakers and writers from the UK and beyond as we explore the relationship between belief and fiction, religion and pluralism, the complex web of religion, politics, and the environment, fantasy and spirituality, and much more.

You will be able to discover the deep-rooted connections between religion and historical fiction, and the darker side of religion and crime fiction. Understand why some prominent thinkers and writers have engaged with diverse beliefs so creatively. And explore why Edinburgh as a place has held such special fascination in literature.

Winter Tales will take place in the iconic New College buildings, from 3rd-5th December 2021. Some events have a small charge but most are free. Refreshments will be available, along with plenty of Christmas cheer.

Please note that the artists appearing may be subject to change.

Robert Harris:
Robert Harris had a successful career as a reporter for Panorama and Newsnight, then as a political editor for the Observer, before becoming one of the UK’s finest writers of historical fiction and thrillers. An international bestseller, his work has been translated into 37 languages. He is the author of Fatherland, An Officer and A Spy, Enigma, Archangel, Pompeii, Imperium and The Ghost.

Sally Magnusson:
An established TV personality in her own right, Sally is daughter of Mastermind interrogator Magnus. She presents Reporting Scotland for BBC Scotland, as well as Radio 4’s Tracing Your Roots and Songs Of Praise. As a writer, Sally has been widely published, including The Life Of Pee, Dreaming Of Iceland and Horace The Haggis Hunter!

Miles Jupp
Miles uses his toff persona to great comedic effect, combining superbly patronising remarks with ungainly attempts to laddish. Perrier award nominated Miles discusses, rants about himself, you, domestic imprisonment, fatherhood, having to have opinions, hot drinks, the bloody government, bad balance, housing, ill health, the ageing process, navigation, other people's pants and, inevitably, a number of other things. Miles started performing stand up in Scotland in 2000 and the following year won both So You Think You’re Funny and The Leicester Mercury Comedian of the Year. Since then Miles has performed all over the world with his exasperated style of humour, getting a laugh from all of those everyday things that you get a little irked about. His many TV credits include Have I Got News For You, Mock The Week, Michael McIntyre’s Comedy Roadshow and BBC2 hit sitcom Rev, whilst on Radio 4 he's known as panel show host of It's Not What You Know along with appearances on Just a Minute, I’m Sorry I Haven’t A Clue and sitcom In And Out Of The Kitchen, which was nominated for a Writers' Guild Award and will transfer to BBC television in 2014. 'A master of metaphor, a seignior of similes' (Independent) 'His suitcase gags are cute, but this show goes from strength to strength as Jupp finds subjects worthy of his moral outrage' (The Guardian).

Whisky & cheese is one of life's greatest pairings, but why should dairy lovers have all the fun? So come along and join us at Summerhall Drinks Lab.
Read more

Book your tickets now for an interactive gin tasting tour of Scotland featuring 6 gins from around the country at Summerhall Drinks Lab!
Read more

Spirits of the World

Get up close to the Tam O'Shanter chair, see its hidden painting and find out the surprising story behind its links to Robert Burns's famous poem and a king's historic visit to Scotland.
Read more

Dr. Robert Knox: More Than the Boy Who Bought the Beef

Dr. Robert Knox is often associated with Burke and Hare. Join us at Surgeons Hall Museums on 27th January as we delve a little deeper and uncover some of his lesser known tales.
Read more

Create Your Own Mixer