Shorthouse Live at The Voodoo Rooms

Join Shorthouse and full band for their first headline gig at The Voodoo Rooms Edinburgh on Sunday 5th December! 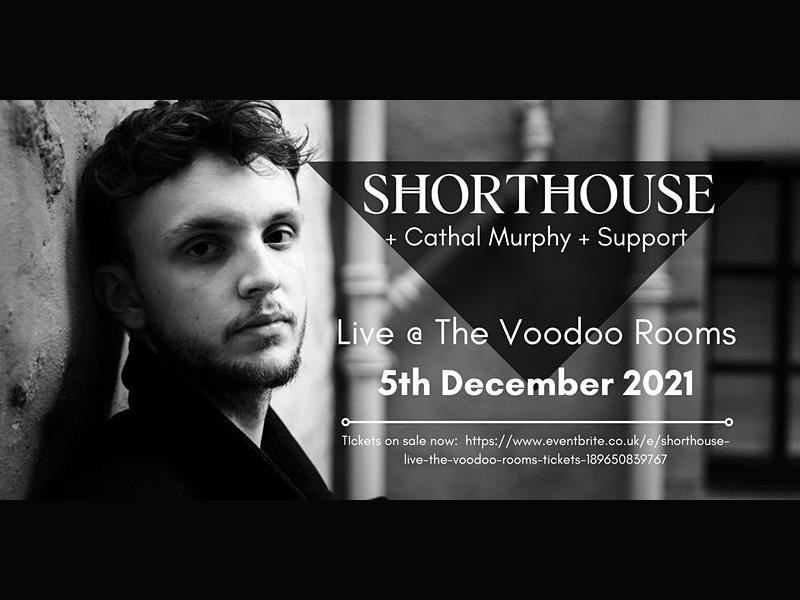 About Shorthouse Live at The Voodoo Rooms

Join Shorthouse and full band for their first headline gig at The Voodoo Rooms in Edinburgh. Support TBA.

Blending the Indie, Folk, and Rock genres, Shorthouse moves between a guitar and piano-driven arrangement with strong use of layered vocal harmonies and a paired-back clean, acoustic sound. Influences such as Fleetwood Mac, The Paper Kites, James Taylor, Nick Drake, and Joni Mitchell are easily noted throughout his repertoire.

Following the enthusiastic reception of the 2020 single release ‘Walls End,’ the Shorthouse sound has consolidated with new material exploring self-reflection and life experiences. Rob is delighted to soon be able to share his creative output of the past few months with exciting new releases.

Joined by band members Finlay Smith, Jonny Richardson, Erin Ferguson, Elaine Shorthouse and special guests, this is a showcase of talent not to be missed.

TuFlamenco is back with its traditional flamenco performance on its purest form presenting 'Tablao Flamenco' right in the heart of the city.
Read more

Sean Taylor is one of the most exciting and hard working names on the international roots and blues circuit and you can catch him at The Voodoo Rooms on 10th February!
Read more

In support of his new album, Beans on Toast will be touring some of the UK’s finest independent venues with his brand new live band and stops off at The Voodoo Rooms on 2nd March 2022!
Read more

Don't miss Rhoda Dakar, British singer and musician best known as the lead singer of The Bodysnatchers, when she plays The Voodoo Rooms on Saturday 5th March!
Read more

The Urban Voodoo Machine is a talented collective of London-based musicians, self-styled purveyors of 'Bourbon-soaked Gypsy Blues Bop 'n' stroll' and they are coming to The Voodoo Rooms on 18th March!
Read more

Punk legends Buzzcocks are heading out on tour in 2022 performing their classic hits and more! Catch them at The Voodoo Rooms on 19th March!
Read more

Shabazz Palaces announced a new, headlining European tour for 2022 with a date at The Voodoo Rooms on Thursday 24th March!
Read more

The former frontman of The Correspondents, Mr Bruce is heading out on a UK tour! Catch him live at The Voodoo Rooms on Saturday 2nd April!
Read more

Black Country, New Road will bring their much hyped live show to the Voodoo Rooms on 9th April!
Read more

If you like your music loud and proud it's time for a 'Black Night' at the Deeper Purple show coming to Edinburgh's Voodoo Rooms on 23rd April!
Read more

The Grahams are on tour in support of their album 'Sha La La' and stop off at The Voodoo Rooms on Wednesday 4th May!
Read more

Legendary Brit-Funkers, The Blockheads, will be playing all the old favourites and new material when they play The Voodoo Rooms on 7th May 2022!
Read more

Heads Up, a UK Talking Heads tribute band, bring their tour to The Voodoo Rooms in Edinburgh on Thursday 12th May.
Read more

Will Varley is heading out on tour across the UK in the Spring of 2022 with a date at The Voodoo Rooms on 12th May!
Read more

Oh My God! It’s The Church

Oh My God! It's The Church is the non-stop party church service where ALL are welcome, don't miss it at The Voodoo Rooms, Edinburgh on 13th May 2022!
Read more