You are invited to join us for an evening of music and poetic hymns to celebrate the legacy of the 13th century Sufi poet, Yunus Emre at the Assembly Roxy on 20th October! 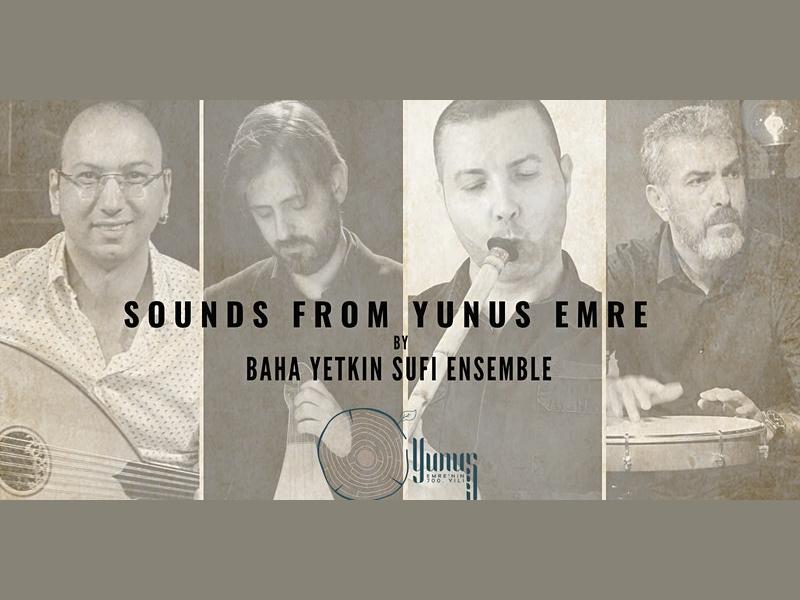 About Concert: Sounds from Yunus Emre

As part of the commemoration of the 700th Anniversary of Yunus Emre's passing, Yunus Emre Institute in London is delighted to organise Sounds from Yunus Emre concert at the Assembly Roxy in Edinburgh in coordination with ATAS and Turkish Consulate General in Edinburgh.

The concert, which will feature the brilliant Sufi Ensemble with Baha Yetkin (Oud&Vocal), Alp Genc (Ney), Alexandros Koustas (Istanbul Kemence) and Muammer Saglam (Percussion), will be held on Wednesday, 20 October 2021 at 6:30-8:00 pm.

The devotional music of the Sufis, sings of divine love. While, Yunus Emre’s poetry with its simple, rhythmic verse and spiritual depth, is an important well for lyrics for Sufi music. More than 250 of his rhythmic poems which emphasise divine love have reached today. Through these compositions, Yunus Emre's poems and philosophy survived to the present day by living among the people.

Sufi Ensemble will introduce the audience to Yunus Emre and the values he represented to enrich the concert which features Yunus Emre’s hymns that touch the heart and soul of listeners. This will be an unforgettable evening for those who are interested in the themes of friendship, brotherhood, divine love and Sufism.

Baha Yetkin (Vocalist & Oudist): Turkish oud player and composer Baha Yetkin grew up in Istanbul, the melting pot of European and Middle Eastern musical cultures. This is reflected in his methodically-written compositions, which are an amalgamation of improvisations based on Istanbul music and the complex rhythmic structures of Middle Eastern music, all with an emotional, meditative and spiritual undertone.

Alexandros Koustas (Kemenche): Alexandros studied the violin and the viola at the Royal Academy of Music. He is the principal violist of the English National Ballet Philharmonic and was recently appointed as a member of the Academy of St Martin in the Fields. Alexandros played the Kemençe in ENBs’ new production of Akram Khan’s Giselle with the ENB Philharmonic, in London and on tour.

Alp Genc (Ney): His passion about music started at the early childhood. In the late 90's, whilst studying Business Management at Anatolian University, he incidentally met his influencer F.Aydin -woodwind instrument producer & music teacher in Ankara. He rapidly improved himself in the Kaval & Mey instruments and then started participating in several music bands. He then continued making music by forming a band at the National Army in 2002-2003. His inspiration in sufism has gone ahead to expand more with Neyzen Murat Ferhat Yegul at Yunus Emre Institute in the recent years & he began to perform with the Ney instrument since. Alp Genc still collaborates with many musicians & bands in the UK as a Ney/Mey performer.

Muammer Saglam (Percussion): Turkish percussionist Muammer Sağlam was born in Trabzon but moved to London at a young age. Since then, he has been performing with many musicians around the UK and has been involved in cultural documentaries with both the BBC and ITV. He plays world percussions such as; cajón, charms and cymbals as well as Middle Eastern percussions such as darbuka, frame drum and req. Muammer Sağlam has been still collaborating with many musicians in the UK.

2021, the 700th anniversary of the passing of Yunus Emre, famous 13th century poet and Sufi. As such, 2021 has been named Yunus Emre Year by UNESCO. Yunus Emre, has an immense influence on Turkish literature and philosophical thought, from his own day until the present. In honour of this momentous anniversary, Yunus Emre Institute in London, the Turkish Consulate General in Edinburgh and ATAS (Association of Turkish Alumni and Students) are jointly organising a 3-day celebration in Edinburgh.

The celebrations will include the Sounds from Yunus Emre concert lead by master Oudist Baha Yetkin (Wednesday 20 October 2021), an ebru (paper marbling) workshop with artist Esma Uğurluoğlu (Friday 22 October 2021) and the screening of Yunus Emre: Aşkın Sesi with a question-and-answer interview with the screenwriter and director of the film, Kürşat Kızbaz (Saturday, 23 October 2021)

Other Events at Assembly Roxy

Tam O’Shanter and Other Tales

Join Stolen Elephant Theatre for an evening of the supernatural! Expect to laugh and hoot, and for the odd shiver to go a running down your spine!
Read more

The TuFlamenco crew are back with the sole intention of bringing the essence of a genuine and raw flamenco tablao straight from the heart of Andalucia.
Read more

Idlewild will be celebrating their landmark 25th anniversary, with a tour culminating at a homecoming gig at the Usher Hall!
Read more