An Artist’s Life, Act I

This exhibition at The Scottish Gallery charts painter Alexander Goudie's beginnings in post-war Paisley in the 1940s, student years at Glasgow School of Art in the 1950s and his early career. 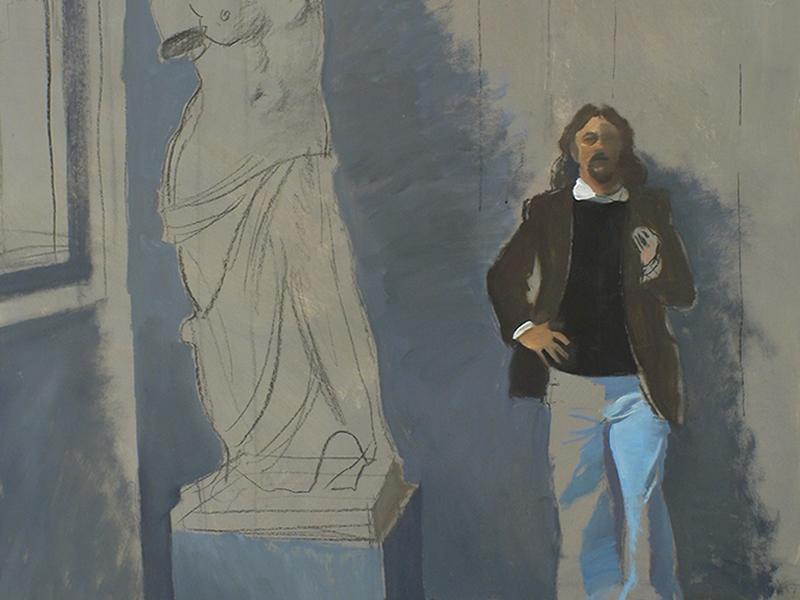 About An Artist’s Life, Act I

Flamboyant and confrontational, Scottish figurative painter Alexander Goudie (1933-2004) was part of a generation of influential painters who graduated from the Glasgow School of Art in the 1950s, and whose reputations are ripe for reappraisal. This new exhibition at The Scottish Gallery charts his beginnings in post-war Paisley in the 1940s, student years at Glasgow School of Art in the 1950s and his early career – a period in which Goudie embarked upon a life-long project to document the evolving landscape and culture of his wife’s homeland, Brittany.

Born in Paisley in 1933, the son of a plumber, Alexander Goudie soon revealed an exceptional talent for drawing and painting. He was given special dispensation to enter the Glasgow School of Art at the unusually young age of 16; students from this period have described Goudie as ‘a bit of a rock star’ and he was awarded the school’s Newbery Medal in 1955. In the late 1950s, Alexander Goudie travelled to France and Franco’s Spain for the first time, where he was awe-struck by the great art collections of Paris, Madrid and Toledo. These initial encounters with the lifestyle and art of the continent would prove transformative. He absorbed the influence of artists like Picasso, Manet, Velázquez and El Greco and when he returned home to the drab cultural landscape of post-war Scotland, Alexander Goudie was inspired to create paintings that promised escapism, sensuality and beauty.

Confidence and exuberance became the hallmarks of Goudie’s art as the works in this exhibition demonstrate. They reveal his enjoyment of life, his appreciation of beautiful women, his relish of strong character and his pleasure in social interaction. His ability to convey these things through paint is what made him such a fine artist.

Glasgow, in the post war era, saw the emergence of extraordinary talents like Joan Eardley, Alasdair Gray and John Byrne. It is a period whose significance in the story of Scottish art has often been overlooked, in favour of more glamorous and notorious graduates of Glasgow School of Art from the 1980s and 90s. But, these were decades of enormous change and creative energy as Scottish art in the 20th century came of age, and Glasgow was at the very forefront.

Goudie became a prominent and charismatic figure in the art scene, sought after for his portraits with sitters including Lord Chancellors, business tycoons, celebrities (including Billy Connolly) and Her Majesty Queen Elizabeth II, and exquisite still life paintings. Through the work he produced in his studio, in a Victorian palazzo in Glasgow, he established an enviable reputation. But what was perhaps less appreciated during his early career, was the extent to which he alternated painting portraits of businessmen, celebrities and royalty with portraying rural farmers and trawlermen in Brittany, where he travelled for two months every summer from 1961.

This exhibition reveals an unseen archive of sketches and paintings which Goudie produced in his adoptive homeland, and which would form the basis of one of the biggest projects of his later career, the décor of the 25,000 tonne Brittany Ferries flagship, ‘Bretagne’.

As conceptual art came to the fore in the second half of the 20th century, Goudie was unrepentant in following his principles of painterliness, craftsmanship and technique. His son Lachlan Goudie, an award-winning broadcaster, author and painter himself, comments, To his last breath he was an unreconstructed romantic, an egomaniac, an artist immersed in the tradition of painting. His was a life dedicated to colour and painterly flamboyance, an eye and a hand that documented his most valued experiences with unrivalled skill. I will always be his apprentice.

Guy Peploe, Director at The Scottish Gallery, comments, No project was too grand: a commission for all the artwork and designs for the interiors of a giant ship from Brittany Ferries; Strauss’s Salome or Burns’ Tam o’Shanter. The artist thought big but honed his aesthetic to the last flourish, for a highlight on a ceramic jug or vital pentimento in a life drawing; attention to detail was obsessive and his art was an extension of his personality. From the declaration explicit in his early portraits that says: ‘I have arrived,’ to the touching depiction of the children, to his love letter in paint to his Breton wife Maïnée, to accomplished easel paintings and designs and sketches fizzing with creative energy, the personality of the painter is not hard to find and forms a vital, recently overlooked contribution to post-war Scottish art.

A 2024 exhibition will consider his later career and bigger theatrical projects.


Where possible we will update our listings to notify of cancelled, postponed and rescheduled events, however we STRONGLY ADVISE that you check with the venue/organiser in the first instance for updates.
All information (whether in text or photographs) is supplied in good faith but should not be relied upon as being a statement of representation or fact.
Want to be the first to hear about what's happening in Edinburgh? Just hit 'Like' on our What's On Edinburgh Facebook page, join the What's On Scotland Facebook Group and 'Follow' on our @WhatOnEdinburgh Twitter or Instagram accounts and you're all set!

Other Events at The Scottish Gallery

These practical sewing courses will help you become familiar with the basics of machine sewing and help you build your confidence using a domestic sewing machine.
Read more

In Our Yard: After Zooms

‘After Zooms’ are a re-invention of Capital Theatres popular play days and they are happening live and in-person in Festival Theatre's Courtyard this summer.
Read more

In Our Yard: Family Takeovers

Family takeovers are back with two hour sessions delivered outdoors by professional artist, providing an opportunity for families to make, create and play together.
Read more

Join The Edinburgh Sewcial Club for 6 evenings in the studio and learn how to make your own clothes. You can choose any garment you'd like to make!
Read more

Learn, create and perform your own magic in this workshop at Lauriston Castle this summer for Ages 7 - 11!
Read more

This is the first major solo show in five years from Bulgarian-born, Edinburgh-based artist Diana Savova, featuring over 30 new works in ink, oil and acrylic with surreal motifs.
Read more

Join us at Lauriston Castle for a 2-day workshop making beautiful mosaic panels inspired by the colours of summer with Margaret Findlay.
Read more