Clairvoyant medium and psychic Clinton Baptiste has gone exploring, stateside. Let him take you on a journey from his humble roots via the dazzling heights of Sin City at The Stand Edinburgh! 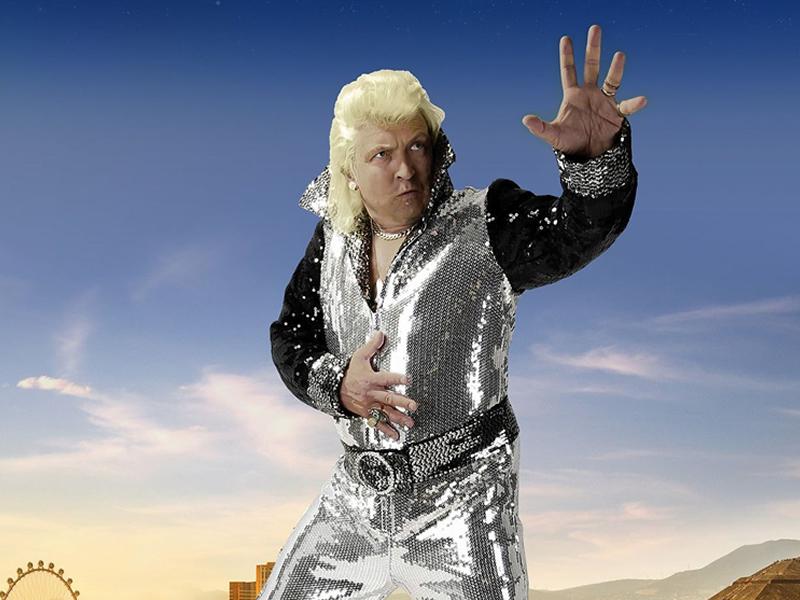 About Clinton Baptiste is... Stratospheric!

From Bolton via Vegas…..to the stars!

Not quite Caesar’s Palace but a series of shows in Vegas have lifted his celebrity status up a notch. Let him take you on a journey from his humble roots via the dazzling heights of Sin City…..

…..and on to an amazing finale that will heal the world.

Following his sell out tour of 2019-20 “The Paranormalist Returns”, Clinton has taken a whirlwind tour of the US.

Hear his tales of rubbing shoulders with the hippy dippy new-agers from La La Land and how he hits the big time in Vegas with his lavish psychic show.
For a while things couldn’t be better. A new lease of life, new teeth, new hair and a buttock lift. (Both of them.)

But a humbly spiritual man at heart, Clinton realises that sometimes all that glitters ain’t gold and now returns to you, his beloved British audience to once again conjure up those pure selfless gifts he was born with.

For tonight, ladies and gentlemen, Clinton will all cast fame and fortune aside……and heal the world!

The Cabaret of Dangerous Ideas - POSTPONED

Tiff Stevenson will deliver her 2019 critically acclaimed solo show about the extreme sport of womanhood at the Stand Edinburgh!
Read more

Gary Delaney is returning to the road with another onslaught of lean, expertly crafted gaggery! Catch him at the Stand Edinburgh on 11th July!
Read more

'The Time Show' is the latest comedy/theatre/spoken word show by writer and performer of some of what he writes, Rob Auton, catch it at the Stand Edinburgh!
Read more

Luisa Omielan: God Is A Woman

Fresh from a successful Off-Broadway run, comedian Luisa Omielan will tour the UK with her highly anticipated God is a Woman show, catch her live at The Stand Edinburgh on 11th October!
Read more

Finalist of Britain's Got Talent and star of BBC Radio 4's Citizen of Nowhere Daliso Chaponda is back with a new hour of comedy, catch him at the Stand Edinburgh on 13th October!
Read more

Bridget Christie: Who Am I?

Award winning Bridget Christie brings her brand new show 'Who Am I?' to The Stand Comedy Club Edinburgh!
Read more

Mark Watson: This Can’t Be It

We've all had some pondering to do about the fragility of life recently, but don't worry, skinny national treasure Mark Watson has it covered. Catch him at The Stand on Wednesday 3rd November!
Read more

In a world gone crazy, can philosophy help? This sparklingly brilliant new show from Rob Newman tries to give you the answer!
Read more

Comedian John Robertson's The Dark Room is a gut-busting rock n' roll experience for everyone who buys a ticket! Don't miss it at the Stand Edinburgh!
Read more

Stewart Lee has reworked sixty minutes of his show 'Snowflake Tornado' that have been rendered irrelevant by events, it's sure to be shoddy as hell but all proceeds will go to The Stand Edinburgh!
Read more

It's confessional storytelling at its funniest as Larry Dean brings his new tour, Fudnut, to The Stand Comedy Club Edinburgh in March 2022!
Read more

Following a sold out tour across Europe & Australia in 2019 and her most recent BBC stand up special Power & Chaos, Fern Brady brings her fifth solo show Autistic Bikini Queen to The Stand Edinburgh!
Read more