Pan Amsterdam has announced a UK tour for September, including a night at Sneaky Pete's Edinburgh on the 15th! 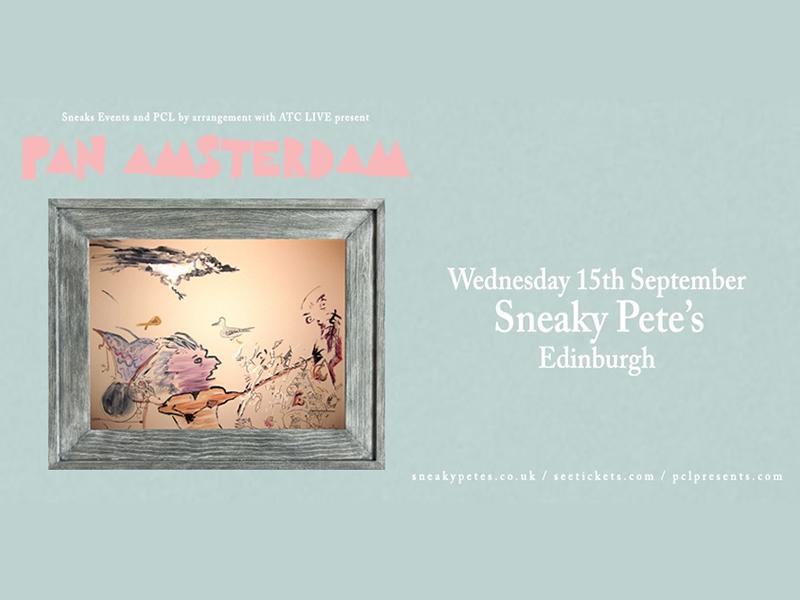 Pan Amsterdam came to be when Leron’s friend Malik Ameer (the rapper in Madison Washington) introduced him to London based label, Def Pressé. thatmanmonkz (producer of Madison Washington) sent Leron Thomas a ‘beat-tape’ which inspired Leron to develop a rap persona, with a trumpet... of course. The result was Pan Am’s first album, The Pocket Watch. Eventually a demo song, Plus One from The Pocket Watch was ‘leaked’ to a few select people, one of them happened to be, Iggy Pop who soon premiered Plus One on his BBC 6 Music show. With significant support from 6 Music, The Wire, DJ Mag and several influential Underground Hip-Hop/Jazz publications, Pan Am was well on his way.

Since then, Leron Thomas has toured extensively with Iggy Pop as collaborator, sometimes as bandleader, a friend, composing and producing the majority of Iggy Pop’s recent album, Free. Over the past two years, Pan Amsterdam has steadily released singles, EPs and other oddities since the release of The Pocket Watch. Following a UK Tour for Pan Am’, he embarked on a US Tour with Open Mike Eagle which led to a collaboration with Open Mike Eagle entitled No Snare for Pan Amsterdam’s 2019 EP Elevator Music Vol 1. which also featured a guest appearance by Iggy Pop on the 7’ inch collectors vinyl Mobile/ 15 Seconds. Pan Amsterdam’s most recent album, HA Chu, brings together new friends, Jason Williamson (Sleaford Mods), Jimi Goodwin (Doves), acclaimed French producer, GUTS and some old friends, Malik Ameer and producer Mr.Shn. When Leron hosted BBC World Service show, Music Life he met Jason Williamson. Candid moments such as these abound on HA Chu’s interludes as Leron Thomas reveals the composer, musician, and man behind the mask of Pan Amsterdam.

HA Chu (released Oct 2nd) has met with much critical acclaim thus far. Highlights include a 4/5 star review in The Times and Sunday Times. AOTD at Bandcamp. BBC 6 Music Playlist as well as Album of the Day at 6 Music. Reviews in Vinyl District The Wire, MOJO, Record Collector and an appearance on OkayPlayer amongst many other blogs, stations and magazines.

Other Events at Sneaky Petes

Daniel Avery returns to Sneaky Pete's on Monday 27th September with an amazing new record: Together In Static.
Read more

Alice Merida Richards and Sam Pillay aka Virginia Wing are heading out on tour in support of their new album 'private LIFE', catch them live at Sneaky Pete's on the 28th September!
Read more

Liz Lawrence is currently touring the UK and stops off at Sneaky Pete's Edinburgh on Monday 4th October!
Read more

Thumper are on tour this October and stop off at Sneaky Pete's Edinburgh on Tuesday 12th October!
Read more

Cherym are a three-piece from Derry in Northern Ireland with some seriously infectious songwriting credentials. Don't miss them when they play Sneaky Pete's on 16th October!
Read more

Jockstrap are going on tour in 2021 and will be playing Sneaky Pete's Edinburgh on Sunday 17th October!
Read more

Catch Goan Dogs when they stop off at Sneaky Pete's on Monday 18th October as part of their UK tour!
Read more

Brighton's Gender Roles have announced their 'Rock Refresher' UK tour which will stop off at Sneaky Pete's on 19th October.
Read more

Just Mustard have been steadily building a reputation as one of Ireland’s most thrilling new bands and you can cath them at Sneaky Pete's Edinburgh on Thursday 21st October!
Read more

There’s an enticing lost world exoticism to the music of Bananagun. Catch them at Sneaky Pete's on Saturday 23rd October!
Read more

Post-punk four-piece Sprints create a unique sound that pulls from garage, grunge, punk and beyond, catch them at Sneaky Pete's on Tuesday 26th October!
Read more

The seminal rock band Mush have reformed to play a series of intimate UK dates including one at Sneaky Pete's Edinburgh on Wednesday 27th October!
Read more

Fife based indie-pop group Club Beirut have announced a Scottish tour for 2021, catch them at Sneaky Pete's on 29th October!
Read more

Erika De Casier, one of the most essential names in modern RnB, comes to Sneaky Pete's Edinburgh as part of her upcoming tour!
Read more

Don't miss FUR when they stop off at Sneaky Pete's on the 18th November as part of a UK tour!
Read more

Bess Atwell is heading out on tour with music from her new album 'Already, Always', don't miss out on tickets for her show at Sneaky Pete's on November 20th!
Read more

London singer Greentea Peng is on a European tour in 2021 and brings it to Sneaky Pete's Edinburgh on 23rd November!
Read more

Ash will be performing at Sneaky Pete’s on December 3rd as part of the Passport: Back To Our Roots campaign.
Read more

The Surfing Magazines. One half of Slow Club and 2/3rds or The Wave Pictures, plus a really great drummer. Catch them at Sneaky Pete's on 15th January!
Read more

AGP is delighted to present up and coming indie band Open Plan with support from The Devanties and Paradise Collective at Sneaky Pete's on 25th March 2022.
Read more