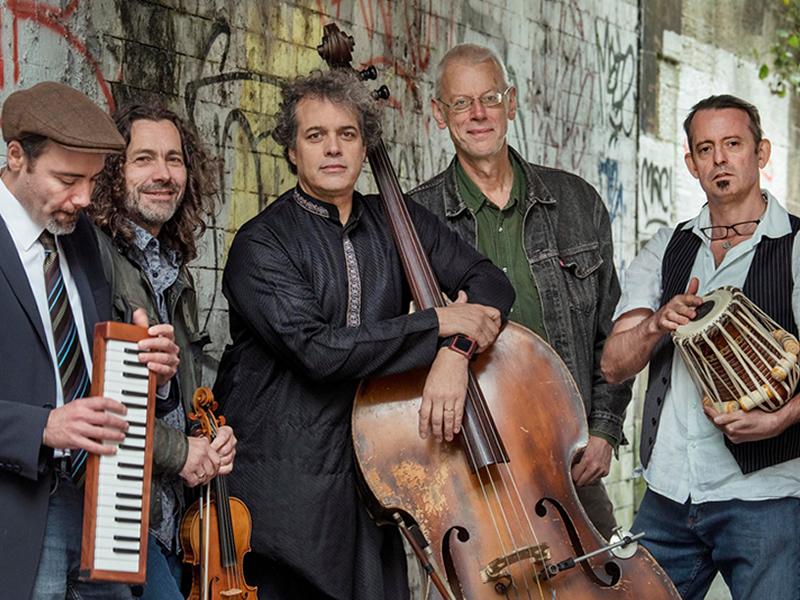 Thrillingly original cutting-edge klezmer and world folk music from some of Scotland’s finest musicians. An intoxicating, life-affirming mix of Eastern European dance music, Middle Eastern rhythms and virtuoso performances. Combining the energy and passion of world folk music with the excitement and soul of improvisation, the band will draw you in, turn you inside out, and leave you smiling uncontrollably – all in the space of one tune.

Moishe’s Bagel began in 2003, the lucky accident of an Edinburgh-based Chilean tango singer and four like-minded musicians. A shared love of klezmer, jazz and latin music soon saw us onstage at Henry’s Cellar Bar with a few tunes and a lot of enthusiasm. Since then, the band has regularly toured the UK, Ireland, and the Czech Republic, notching up sellout gigs at the Jazz Cafe, Sage Gateshead, St George’s Bristol, Edinburgh Queens Hall and many many more. Along the way, we have managed to record four CDs, earning us a Songlines Top of the World and Sunday Telegraph top 10 world albums. In 2015, we were invited to compose and perform an original score to the Soviet silent film classic Salt for Svanetia.

While we take every opportunity to ensure the details for Playtime presents Moishe’s Bagel are accurate, we always advise that you contact the event organiser before setting out for the event to avoid disapointment. All information (whether in text or photographs) is given in good faith but should not be relied upon as being a statement of representation or fact.

Join the Taibhsear Collective as they host the last in their trilogy of explorations into Winter customs!
Read more

Allow yourself to be transported straight to Andalucia from the comfort of your own living room as Daniel Martinez takes you on a journey through the works of legendary flamenco maestros!
Read more