Aurelio Voltaire's live shows, whether solo or with his skeletal orchestra, are full of stories and games. Make sure you catch him live at Opium Edinburgh on 12th April 2022! 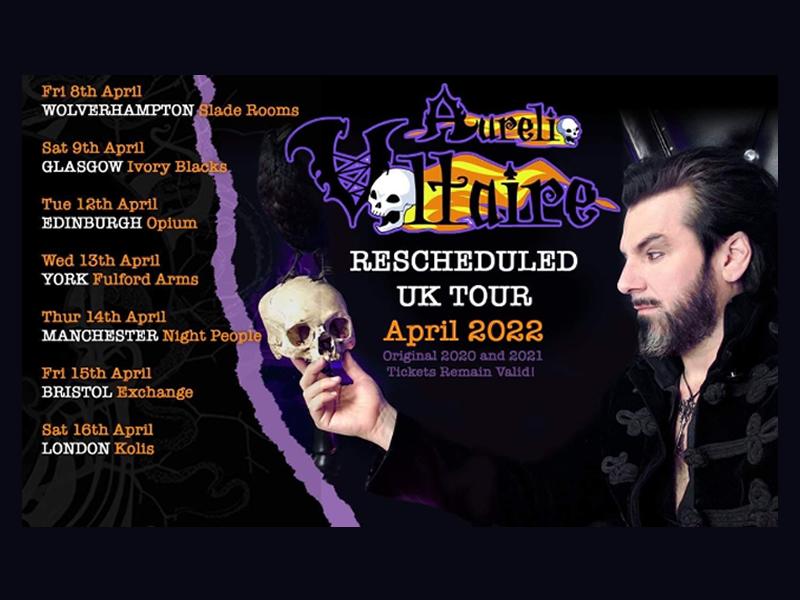 Aurelio Voltaire is often described as a modern day renaissance man. He is a singer/ performer, creator of comic books, animation and toys.

An internationally touring musician, he is at the forefront of the Gothic, Steampunk and Dark Cabaret genres headlining some of the biggest horror, sci-fi and comic book conventions as well as Gothic and Steampunk festivals for nearly two decades. His music can best be described as a collection of murder ballads, tongue-in-cheek exercises in the macabre, with just enough bawdy songs about Star Trek and Star Wars to keep a convention audience rolling in the aisles. Many know him for his songs "Brains!" and "Land of the Dead" from the Cartoon Network show "The Grim Adventures of Billy And Mandy" and for the viral fan animated videos for his songs “The Night” and “Zombie Prostitute.” Voltaire's live shows, whether solo or with his skeletal orchestra, are full of stories and games. Many describe his shows as sitting around a fire while an old friend regales you with tales, presuming that old friend drinks a liter of rum a night, dates zombies and wrestles Krakens.

Voltaire has been recording and touring for over 20 years. He's released 13 full length CDs.

Most recently, Aurelio Voltaire can be seen in his informative and hilarious Youtube series, Gothic Homemaking. In this show, that can best be described as Vincent Price taking over for Martha Stewart, he demonstrates how to turn your boring apartment into a Gothic lair with the help of a desiccated co-host, Orville Deadenbacher and a bunch of other recurring monster characters.

While we take every opportunity to ensure the details for Aurelio Voltaire are accurate, we always advise that you contact the event organiser before setting out for the event to avoid disapointment. All information (whether in text or photographs) is given in good faith but should not be relied upon as being a statement of representation or fact.

Other Events at Opium

Tradfest is delighted to present their first annual Rebellious Truth Lecture on 10th May and the first speaker is Karine Polwart. The evening will begin with a performance by Mike Vass.
Read more

Filmed in the heart of 12th Century Edinburgh, St. Giles Cathedral provides the unique canvas for a new collaboration between the SNJO and Russian painter Maria Rud.
Read more

15th May 2021
The Brunton Theatre, Musselburgh

Arlo Parks announces her 'Collapsed In Sunbeams Tour' with a show at The Mash House Edinburgh on Tuesday 18th May 2021!
Read more

Lecture: Roaring Sound: The Instruments of the Jazz Era

This talk will give a brief introduction of jazz as a style of music and explore the different instruments played in a typical jazz band of the 1920s.
Read more

Get together with your nearest & dearest and wave goodbye to a winter spent indoors with an incredible variety of entertainment at The Parking Lot Social Spring Breakout Edinburgh!
Read more